• The Iberian Centre for Research and the Fight against Forest Fires (CILIFO) reports that the EU’s Green Pact is leading to further progress towards a Europe of the regions.

23.06.2020. The European Union has several initiatives that aim to include regions and cities directly in the decision-making process and, specifically, in those processes related to development (environmental, economic, social etc). In this case, the Committee of the Regions has launched the “Green Deal Going Local” group, in order to promote direct contact between the European Union and the various European regions in the areas of the environment, the circular economy and innovation, among others.

The Committee of the Regions has recently set up the Green Deal Going Local group with the aim of empowering European regions and cities to implement the Green Deal in a more efficient and appropriate way. The working group created has thirteen members representing European cities and regions, including Juan Espadas (Mayor of Seville) as chairman of the group. This group will work directly with the European Union (through the Committee of the Regions) to define, implement and evaluate the various measures needed to meet the objectives of the Green Pact.

The presentation of the long-term European budgets for the period 2021-2027 shows the environmental commitment of the European Union. Even in circumstances such as the current one, with the Covid-19 pandemic and its consequent economic crisis, the EU is still committed to sustainable and environmentally friendly economic growth.

According to the website of the European Committee of the Regions (https://bit.ly/2YoVsJ2), the three main objectives of this group are

– To provide a cross-cutting vision of the many policy areas within the European Green Agreement and to ensure policy coherence and consistency between archives and related opinions.

– To strengthen the institutional scope of the European Committee of the Regions on the Green Agreement in order to put cities and regions at the centre of the path towards climate neutrality.

– To channel the challenges faced by local and regional authorities in implementing the green transition locally and communicate their achievements and best practices to facilitate replication across the European Union.

ABOUT THE GREEN DEAL

On 11 December 2020, the European Commission reported in a communication on the launch of a new project to be called Green Deal (hereafter referred to as the Green Pact).

Why?
The Green Deal is a response by the European Union to the challenge of ensuring a healthy environment for all European citizens. With this project, the EU wants to direct its growth towards a greener future with the environment at the centre of the European agenda.

Challenges and objectives
In order to promote a society based on the values of equality and justice, it is essential to defend the environment for all European citizens. To this end, the prosperity and competitiveness of the European economy must be promoted, and this environmental ethic must not be abandoned either.

All these objectives cannot be achieved without a concrete challenge on which the various European bodies can focus. That is why the Commission is proposing to put an end to all greenhouse gas emissions throughout Europe by 2050. A challenge to be met in 30 years’ time, in which states and regions will have to work hand in hand with the EU. 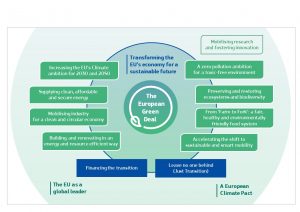 Image made by the European Commission in its Communication to the other European bodies on the establishment of the Green Pact: https://bit.ly/2VazHe6

For more information on the Green Deal, you can find here the direct link to the document presented by the European Commission: https://bit.ly/2VazHe6