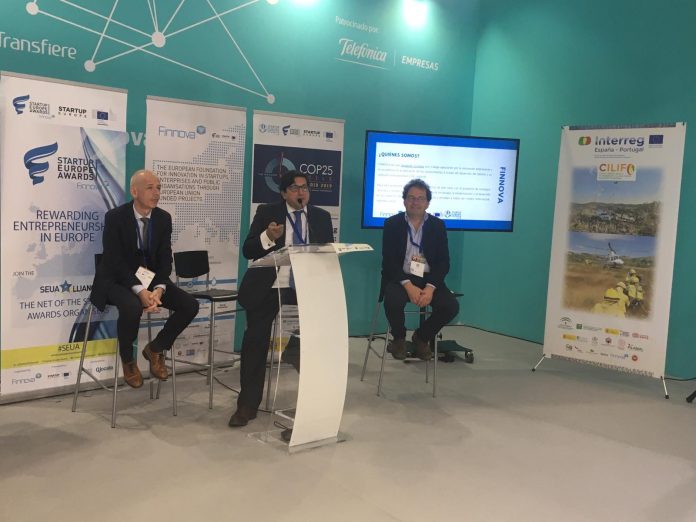 13.02.2020. Transfiere constitutes a space for the exchange of knowledge and technology that brings together various professionals and sectors, in order to contribute to the improvement of the competitiveness of the business sector, promote innovation and enrich the national R&D&I ecosystem.

During the event, held at the Palacio de Ferias y Congresos de Málaga (FYCMA), a round table was held: ‘EU 2027: European subsidies, guarantees and loans for EU funds’. It was moderated by the General Director of the Finnova Foundation, Juan Manuel Revuelta, and the Senior Economist at the European Commission, Rudy Aernoudt; the CEO of Interoffices and Workero and Co-Founder PropTech House of European PropTech Network, Dirk Paelinck; and the Co-Founder Global Super Angels Club, Andreas Mihalovits took part in it.

The objective was to inform entrepreneurs and all those interested in the large amount of European aid that exists for investment and that, on many occasions, are not accessed due to lack of information.

The Iberian Center for Research and Fight against Forest Fires was one of the projects of entrepreneurship, self-employment and return of talent, exposed as an example of job creation by the director of Finnova. CILIFO is a project approved by the Interreg POCTEP (2014-2020) Spain-Portugal Programme, which belongs to the Thematic Objective 5 of the Programme, which promotes adaptation to climate change in all sectors. It also responds to the investment priority, concerning the POCTEP Programme, 5B: Promotion of investment to address specific risks and guarantee adaptation to disasters and development of disaster management systems. One of the objectives of the CILIFO project is to promote the creation of sustainable and quality employment in the area and to reduce the economic cost of fires by creating a rural economy linked to the landscape.

In addition, the Firefighting Open Innovation Lab was presented during the morning as an accelerator managed by Finnova Foundation, based in Seville, which aims to promote a network of incubators, in a public-private partnership, worldwide, to capture the innovation and technology to fight forest fires, mitigation and adaptation to climate change.