16.096.2020. Today marks 35 years of the signing of the Montreal Convención   Protocol, a document which,  under the Vienna Convention in 1985, established a coordinated response to the environmental problem of the decline in the ozone layer. The ozone layer is a fragile strip of gas that protects the Earth from the harmful effects of sunlight, thus helping to preserve life on the planet. This stratospheric layer protects The Earth largely from harmful ultraviolet radiation from the sun. Thus, “sunlight makes life possible, but the ozone layer makes life as we know it possible,” according to the United Nations website.

In this sense, today’s scientists point to a close relationship between the problems affecting the ozone layer and climate change: therefore, many of the substances that reduce the ozone layer are powerful greenhouse gases. It is well known that forest fires release significant amounts of CO2 into the atmosphere, as well as other gases and particles, which precisely promote the greenhouse effect and climate environment.

But in addition, experts point to the existence of a feedback cycle on this problem, as CO2 released by forest fires fuels climate change, which in turn increases the risk of fires itself. Deforestation, climate change and the risk of wildfires are directly related.

Thus, according to its very nature and focused on the fight against forest fires and its consequences for the adaptation and mitigation of climate change; the project “Iberian Center for Forest FireResearch and Control” (CILIFO) joins the commemoration and celebration of the International Day of the Preservation of the Ozone Layer. In addition, CILIFO is part of POCTEP Thematic Goal 5: Promoting adaptation to climate change in all sectors; and responds to investment priority over the POCTEP Programme, 5B: Promoting investment to address specific risks and adapting to disasters and developing disaster management systems.

In this year of the COVID-19 pandemic, which has brought with it so many social and economic difficulties, the message of treaties to save the ozone layer from working together and in harmony for the common good resonates more than ever and becomes a fundamental message these days. “The theme of the day, “Ozone for Life,” recalls that ozone is not only crucial for life on Earth, but that we should continue to protect the ozone layer for future generations,” as set out on the website of the United Nations International Day for the Preservation of the Ozone Layer.

Portugal is one of the EU countries most affected by forest...

Subsidies to municipalities and autonomous local entities in Andalusia, aimed at... 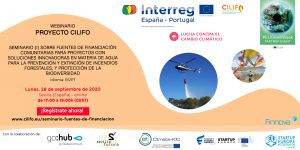 European Week of Regions and Cities 2020

European Week of Regions and Cities