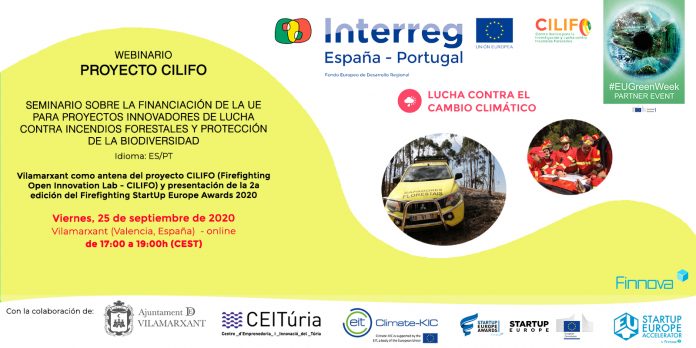 29.09.2020. The European Green Week (#EUGreenWeek), organised by the European Commission, focuses this year on nature and biodiversity. The Finnova Foundation, together with Vilamarxant Town Council (Valencia), has prepared an off-site event to be part of a week that will act as a milestone on the way to the Conference of the Parties (COP15) to the Convention on Biological Diversity.

The event held online on Friday, 25 September 2020, was a seminar on European Union funding for innovative projects to combat forest fires and to protect biodiversity.

The highest number of participants at Zoom was 34; however, the total number of people registered at Zoom for the event was 56 (but they did not all connect at the same time). In addition, it should be noted that the event was broadcasted on the Facebook page of @CILIFO.UE and had 112 views. However, it is estimated that a total of 169 people accessed the webinar (56 registered by Zoom, plus 112 reproductions on Facebook). One of the main objectives of this event was to address the UN SDGs 13 and 15 to innovate in taking urgent action to combat climate change and its effects, as well as to protect, restore and promote the sustainable use of terrestrial ecosystems, sustainably manage forests, combat desertification, halt and reverse land degradation and halt biodiversity loss.

Francisco Senra, from the Knowledge Analysis and Management Area – Forest Fires and Other Environmental Emergencies Branch – Andalusian Environment and Water Agency (AMAYA) of the Andalusian Regional Government (Plan Infoca), was in charge of opening the conference and presented the CILIFO Project.  Subsequently, Xavi Jorge Cerdá, Councillor for Innovation of Vilamarxant Town Council (Valencia), spoke as a representative of the municipality which was presented as an antenna of the Firefighting Open Innovation Lab-CILIFO.

The panellists who completed the block on fighting forest fires and protecting biodiversity and nature were the Director General of Forest Fire Prevention of the Regional Ministry of Agriculture, Rural Development, Climate Emergency and Ecological Transition – Generalitat Valenciana (GVA), Diego Marín Fabra; the researcher of the Forest Fire Group of the National Institute of Agricultural and Food Research and Technology (INIA/iuFOR), Mercedes Guijarro; the manager of the Andanatura Foundation for Sustainable Socioeconomic Development, Julio Campos Vidiella, who spoke about sustainable development and entrepreneurship in the rural and natural environment.

Then it was the turn of the CMO at Finnova Foundation, Lola Bordás, who presented the accelerator/incubator of the Firefighting Open Innovation Lab-CILIFO project; and the project manager and head of human resources and training at Finnova Foundation, Alberto Navarro, spoke about training and young people at CILIFO. As examples of good practice cases Juan Sebastiá Porstalé from WildFire Security explained the SAVAIF system; and the CEO of Lluvia Sólida, Ing. Leonardo Rico Fernández, spoke about fighting fires with Lluvia Sólida.

The Director of Innovation Projects at EIT Climate-KIC, Javier Cañas Andreu, and the Director of European Funds at the Finnova Foundation, Juan Viesca, spoke about European Union funding for innovative projects in the fire sector.

Finnova Foundation is part of the public-private partnership that makes up the CILIFO Project, 75% of which is financed by the Interreg VA Spain – Portugal – POCTEP Cross-border Cooperation Programme (2014-2020), and will be the body responsible for bringing together two territories that are a priori far apart but which have many challenges in common. CILIFO acts to strengthen and unite cooperation, working procedures and training between the Forest Fire Prevention and Extinction mechanisms in the cooperation area of the Euroregion Alentejo – Algarve – Andalusia and is led by the Andalusian Regional Government.

StartUp Europe Awards (www.startupeuropeawards.eu) is an initiative promoted by the European Commission, supported by the Committee of the Regions and the European Parliament; and implemented by the Finnova Foundation (www.Finnova.eu) in collaboration with StartUp Europe.

StartUp Europe Awards (SEUA) is an open innovation tool that allows companies to identify new talented start-ups, which are able to solve current challenges in multiple areas. In this sense, Finnova’s mission with this initiative is to help start-ups and scale-ups become more efficient, intelligent and successful.

In addition, SEUA aims to influence the scale-up process, so that it proposes a new innovation strategy through which new entrepreneurs go beyond their limits and develop cooperation with external organisations or professionals.

It is an open innovation tool to identify innovative start-ups with potential, capable of solving current challenges in the area of forest fire management. The objective is to locate those that offer products, services or methodologies that address the three phases in firefighting 1) Prevention 2) Action 3) Regeneration. They must provide an improvement in the efficiency of resources in firefighting; technological tools; social awareness; fire behaviour; spatial and temporal patterns of fire; fire meteorology and fire danger classification; fire extinguishing techniques; terrestrial, aerial and spatial detection; restoration; etc.

The aim is to identify and support these entrepreneurs and ensure that these good ideas are implemented for the benefit of society as a whole by generating a public-private partnership that leads to the drafting of projects and thus access to European Union funds.

Target group: entrepreneurs and start-ups with ideas/projects related to the fight against forest fires in the 3 action areas of the CILIFO project: Prevention, Action and Regeneration.

The first edition of these awards was held at COP25 in December 2019. There, the CEO of the start-up Drone Hopper, Ana Pérez, presented her project dedicated to the design, manufacture and marketing of high capacity drones, destined to the fight against fire and the protection of the environment. This company was the winner of the main award in the Firefighting-Climate Change category of the SEUA 2019 and is part of the StartUp Europe Accelerator programme of Finnova Foundation, thanks to which it received help and mentoring to present its project, and was thus able to obtain €50,000 from the SME Instrument programme (which accredits it as one of the most innovative projects at European level).

The second edition of the Firefighting StartUp Europe Awards was launched on Friday, 25 September and the final ceremony is intended to take place during the European Week for Waste Reduction (EWWR) in November 2020, in an initiative that aims to promote and implement sustainable resource and waste management awareness actions for one week and to encourage sustainable actions to reduce waste across Europe.

Further information on these awards will be communicated shortly.