Seville, 10.06.2021 – The training day “European funding sources for innovative solutions in the field of forest fires”, an event associated with this year’s edition of #EUGreenWeek 2021, took place on 9 June.

Organised by the Finnova Foundation in the framework of its training actions for the CILIFO Project and its accelerator Firefighting Open Innovation Lab-CILIFO, this hybrid event served to present the different financing options that, from the European Union, are available for innovative ideas and projects in the prevention and fight against forest fires, as well as for the regeneration of soils after this type of environmental catastrophes.

The event, which was followed in Spanish, Portuguese and English and was attended virtually by a total of 67 people, was attended by political and public administration representatives, experts in financing and European programmes and technicians from the forest fire sector who are tackling this problem in a new way and applying new technologies.

In addition, representatives of the different beneficiary entities of the Iberian Centre for Research and Fight against Forest Fires (CILIFO), a project developed within the framework of the Interreg Spain-Portugal cross-border cooperation programme (POCTEP), whose extension covers the Euroregion composed of the Portuguese territories of the Algarve and Alentejo; and Andalusia in Spain, also participated. Throughout the day, the role of moderator was played by José Manuel Requena, responsible for European territorial cooperation and the CILIFO Project at the Finnova Foundation.

The event began with a speech by MEP César Luena, Vice-Chairman of the Committee on the Environment, Public Health and Food Safety of the European Parliament (EP), who focused his speech on the Parliament’s work on the environment and forest restoration. “We are asking for something that does not yet exist in the EU: a common strategy for the sustainable use of soil in order to combat desertification. He also stressed the importance of education, as the institution seeks to involve European students in exchange programmes for conservation, protection and prevention of forest fires through a green Erasmus that includes parameters to promote the EU’s environmental agenda. 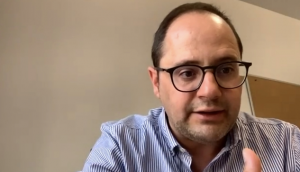 Francisco Senra, Head of Analysis and Knowledge Management at the Agencia de Medio Ambiente y Agua (AMAYA- Junta de Andalucía) presented the general lines of the Iberian Centre for Research and Fight against Forest Fires (CILIFO) and highlighted some of the challenges it proposes, in line with the intervention of MEP Luena, he pointed out the importance of transferring the subject of forest fires to young people through educational programmes.

The highlight of the day, the block dedicated to community sources of funding for projects with innovative solutions in the field of fighting and preventing forest fires and/or regeneration of soils after them, began with the participation of Moisés Álvaro, developer for Spain of the European Institute of Innovation & Technology (EIT) Climate – KIC, who made an introduction to the Regional Innovation Plan for Southern Europe and recalled that the entity seeks to promote “a portfolio of connected projects to maximize the impact of their ideas”.

Finnova’s experts then presented the new funds and programmes that the European Union has launched for the coming period from this year to 2027, a stage in which Europe must face challenges that go beyond the already complicated fight against the pandemic.

Juan Viesca, Director of European Funds at Finnova, broke down numerous European sources of funding for projects such as React EU and highlighted the importance of the NextGenerationEU European recovery funds.

To conclude this block, the moderator of the conference, José Manuel Requena, highlighted the first steps of the LIFE programme for the new period 2021-2027 and invited participants and listeners to find out everything that LIFE can offer at the LIFE EU Info Days, which will take place from 22 to 25 June 2021.

The LIFE programme is the EU’s financial tool dedicated exclusively to the environment. The call for new pilot projects will open in mid-June 2021 and will have a budget of 5.4 billion euros.

The next block of the day was used to give voice to two examples of good practice in the field of forest fires, such as the cases of KrattWorks and Carbón Emergente, two international companies with creative and technological solutions to the serious threat posed by forest fires.

Mattias Luha, CEO of KrattWorks, winner of the recently held Spain-Portugal Accelerathon in the climate change challenge, presented an autonomous system that provides rapid situational awareness for firefighters, rescuers and police. “We eliminate two of the most frequent problems for police and rescue teams: obsolete technology and lack of situational awareness.”

Sebastian Shardy, co-founder and CEO of Carbón Emergente, winner of the second edition of the CILIFO – Firefighting Startup Europe Awards (SEUA-CILIFO) 2020, focused his presentation on the production of biochar, a highly stable charcoal that is incorporated into soils to enhance their water and nutrient retention and microbiological activity.

The day ended with the last three presentations, which focused on training, one of the basic pillars of the CILIFO project. Lourdes González, as coordinator of the CILIFO Project at the ONCE Foundation, explained the training actions carried out by this foundation, a beneficiary partner of CILIFO. She provided information on the realities and needs of people with disabilities who are trained to help reduce the risks they face in an emergency with courses such as Attention to diversity in emergencies in the forest environment, which will hold its third edition next autumn.

Ana Luisa Lourido, representing another of the beneficiary entities of the CILIFO Project, the University of Évora, shared the lines of training actions of this university related to the fight and prevention of forest fires in both undergraduate and postgraduate courses.

To conclude the block, and from another perspective, that of a young person receiving such training, Francisco Guerreiro related his experience in relation to the CILIFO Project as a volunteer of the Interreg Volunteer Youth programme at the Finnova Foundation, where he works as a translator.

Couldn’t attend the event? You can watch it here.

The project “Iberian Centre for Research and Fight against Forest Fires” (CILIFO) focuses on the fight against forest fires and their consequences for the adaptation and mitigation of climate change; in a framework of cross-border cooperation for the prevention of risks and the improvement of the management of natural resources of Spain and Portugal in the Euroregion Alentejo – Algarve – Andalusia. CILIFO is framed within the Thematic Objective 5 of the POCTEP Programme: Promoting adaptation to climate change in all sectors; and responds to the investment priority, under the POCTEP Programme, 5B: Promoting investment to address specific risks and ensuring adaptation to disasters and development of disaster management systems.

CILIFO is being developed thanks to the collaboration of a public-private partnership, led by the Junta de Andalucía and composed of public research organisations, non-profit public interest entities and public administrations, all with the common objective of fighting forest fires.

The CILIFO Project through its Firefighting Open Innovation Lab – CILIFO (accelerator – incubator managed by Finnova) supports the initiatives of entrepreneurs and companies in the field of prevention and fight against forest fires. There are currently 18 companies adhered to the accelerator and the initiatives are being mentored and guided in the search for European funding.

About the Finnova Foundation

Spanish-Belgian Foundation for the financing of innovation, whose objectives are to promote public-private cooperation through innovation to address social challenges such as employment, training, entrepreneurship, the UN SDGs, the circular economy, etc. In its commitment to innovation, Finnova has been organising the StartupEuropeAwards since 2016, an initiative of the European Commission’s DG Connect.

Finnova, headquartered in Belgium and Spain, has its own delegations in Chile and Panama. In Spain, it is present in the Valencian Community, the Basque Country, Andalusia, Madrid and the Canary Islands.

It is a methodology of the DG CONNECT of the European Commission, implemented by the Finnova Foundation since 2016. The SEUAs are an open innovation tool to identify disruptive startups that promotes public-private collaboration and raises awareness of the importance of self-entrepreneurship as a driver of employment. In addition to generating alliances that help to meet the SDGs of the United Nations and the actions of the European Green Pact, thus contributing to the circular economy, the fight against climate change and sustainable tourism.

StartupEuropeAccelerathon aims to identify innovative ideas eligible for EU funding, such as LIFE, Green Deal, Horizon 2020 or NextGenerationEU. StartupEuropeAccelerathon follows the indications of the United Nations Sustainable Development Goals, contributing from each challenge to the proposed SDGs; in the framework of the StartupEuropeAwards methodology of DG CONNECT of the European Commission, which was born from DG Research and Development in 2020 with the pan-European campaign Hackthevirus. It has been successfully carried out with governments such as that of the Valencian Community with the challenge of industrial polluting waters or the Andalusian Regional Government with the challenge of the fight against climate change, forest management and innovation in the prevention, fight against fires and regeneration of burnt areas.

EU Green Week 2021 will provide an opportunity to connect with all stakeholders in a collaborative effort to achieve zero pollution for a toxics-free environment. EU Green Week 2021 will be dedicated to the goal “Aiming for zero pollution”. It will also address other initiatives relevant to the European Green Pact, such as climate initiatives, the future Chemicals Strategy, and initiatives dedicated to energy, industry, mobility, agriculture, fisheries, health and biodiversity.