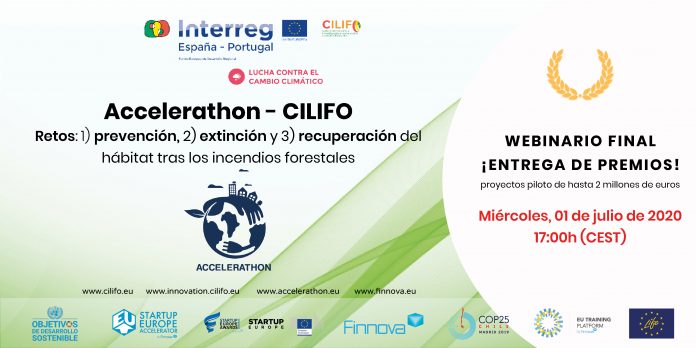 The Iberian Centre for Research and Fight against Forest Fires (CILIFO) organized the Accelerathon on the prevention and extinction of forest fires and the recovery of the habitat in a burnt area, promoted by the Finnova Foundation, as the beneficiary of the project. The final of the Accelerathon – CILIFO was held on Wednesday 01 July 2020 with the participation of the jury and the five finalist teams.

Below you can see again the final ceremony of the Accelerathon – CILIFO and the interventions of the speakers.

Councillor and delegate for Economic Dynamisation and Employment of the City Council of Coria del Río (Seville).

Presents, HyperIN,S.L: Thermal, acoustic and fireproof insulation material from raw materials of plant origin such as rice straw, avoiding CO2 emissions that are produced during its burning. Circular economy.

Presenta Irene Carrasco (ICA): Nueva Tecnología de Combate a incendios forestales SIN Presented by Irene Carrasco (ICA): New Technology to Combat Forest Fires WITHOUT WATER and WITHOUT CHEMICALS Products that use CO2 from forest fire smoke to interrupt the combustion process. The process is developed and patented, does not consume water or chemicals and will last more than 5 hours before it needs to recharge the battery. No chemicals are consumed or released by the device nor does it generate extra CO2, it only uses CO2 already generated by the fire.

Presented by David Vinué Visús (Universitat Politècnica de València – TEAM 4): Operational Risk Index with analysis of the surface at a strategic level (one week) and operational level (for the service office).

Presented by David Ortiz (UVAWorks – TEAM 5): scaling of the prototype aircraft for the ETHON extinguishing aid, with thermal camera and sensor dispersion.

Presented by José Luís Bustos Jiménez (BRIOAGRO TECH, S.L): monitoring of crops, to use agricultural techniques for soil regeneration and irrigation for reforestation with high survival rates, as well as monitoring of reforestation to achieve high values of CO2 fixation, combining biodiversity and new plant species and trees.

Presented by Rodrigo Mardones Rojas (researcher): The Redarquía Preventiva Digital is a social research initiative for the prevention of forest fires and other emergencies at the local level, involving the community and the good use of simple technology (Apps). This initiative is already in practice 2 years ago in Chile, in the Curacaví Commune, Chile, where the occurrence of forest fires has been reduced by 300% in 2 years of application of Redarquía Preventiva Digital. The idea of participating is to promote the use of technology among agencies that have responsibility for fire prevention and communities.

David Ortiz: UVAWorks (in charge of the presentation of the winning project)

José Manuel Requena, International Project Manager at the Finnova Foundation and head of CILIFO at Finnova

José Manuel Requena, International Projects Manager at the Finnova Foundation and responsible for CILIFO at Finnova in the absence of Adrián Noheda, Director of the Firefighting Open Innovation Lab – CILIFO

The President of the Andalusian Regional Government supports the CILIFO Project...