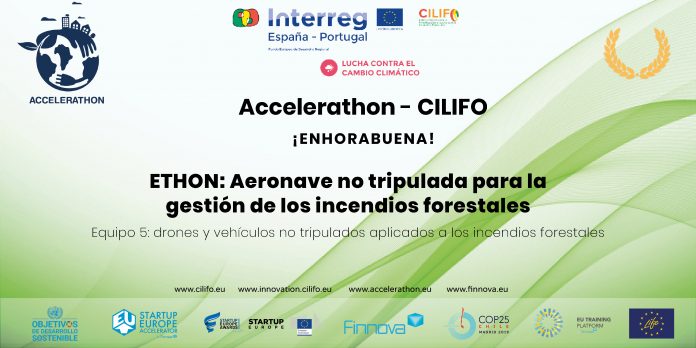 02.07.2020. Team 5 of ‘Drones and unmanned vehicles applied to forest fires’, led by the Polytechnic University of Valencia and presented by David Ortiz from UAVWorks, became the winner of the Accelerathon-CILIFO yesterday.

The team was made up of the Research Technician from the Polytechnic University of Valencia, David Vinué Visús (team leader); the General Manager of CO2 Revolution, Juan Carlos Sesma Fraguas; the Scientific Director of Kowat Biomimetic Control, Paco Morente; the Managing Director of MTC Soft, S.L., Fernando Moreno-Torres Camy; and the external consultant of MTC Soft, S.L., Enrique Moreno-Torres García-Torres.

The Iberian Center for Research and Fight against Forest Fires (CILIFO) organized the Accelerathon on forest fire prevention and extinction and the recovery of the habitat in a burned area, promoted by the Finnova Foundation as the project beneficiary. The final of the Accelerathon – CILIFO was held on Wednesday 01 July 2020 with the participation of the jury and the five finalist teams.

These challenges aim to identify innovative solutions, as well as to attract companies, public or private entities, start-ups or entrepreneurs who define their environmental challenges in terms of forest fire prevention and recovery.

The director of the Regional Operational Centre (INFOCA) – Directorate General for the Environment, Biodiversity and Protected Areas – Ministry of Agriculture, Livestock, Fisheries and Sustainable Development (Regional Government of Andalusia), Juan Sánchez Ruiz, opened the event. During the ceremony, broadcast live on Zoom and Facebook Live, each of the teams presented their project in a pitch and was given a double evaluation. On the one hand, a jury made up of 14 experts analyzed the proposals of each team; their assessment corresponded to 80% of the overall score. The remaining 20% corresponded to the more than 900 votes from the public.

The “Team 5: drones and unmanned vehicles applied to forest fires” project aims to provide up-to-date and accurate information on fire conditions without detracting from the capabilities of aerial and ground fire-fighting means. The management of forest fires involves a large amount of materials and equipment that must be coordinated with maximum efficiency, so the use of an integrated system is considered, including an unmanned aircraft with an optical flight camera, of which a fully functional prototype is available.

From this Thursday, July 2, 2020, until July 14, 2020, the experts in European funds of the Finnova Foundation will mentor the winning team to write the project and submit it to the program call.

The programme has the institutional support of the European Commission’s DG CONNECT and follows the indications of the United Nations’ Sustainable Development Goals.

What is the StartUp Europe Awards? www.startupeuropeawards.eu

What is the Finnova Foundation? www.finnova.eu

What is Startup Europe Accelerator? https://bit.ly/2VqXLcL

The President of the Andalusian Regional Government supports the CILIFO Project...